Maharaja Ranjit Singh is referred to popularly as "Sher-e-Punjab" or the "the lion of Punjab". He rose from an obscure Sikh chieftain of the local "MISL"; MISL refers to a unit or brigade of Sikh warriors of the time. At that time, there were 12 MISLs in the region. He then becomes the "Maharaja" of Punjab – ruling over a vast territory extending across Kashmir and Ladakh in the north, the Indus delta in the south, Baluchistan and Jamrud in the west and north-west and the river Sutlej in the east. 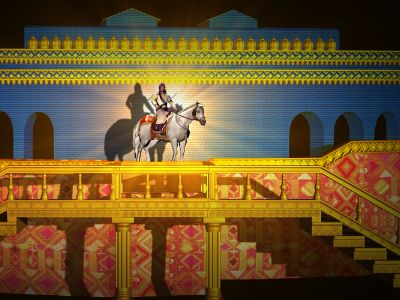 Born on 13TH November 1780, his father, Sardar Mahan Singh, was the chief of the Sukerchakia misl. Little is accurately known about his childhood- in fact, according to historians, there is only one "real" image of what he even looked like much later- (and that is from a painting by Emily Eden). The rest of the pictures are based on hearsay and folklore.

However, it is widely acknowledged that an attack of smallpox deprived him of his left eye in childhood. As a boy, he was sent to Bhagu Singh's Dharamshala at Gujranwala to learn Gurumukhi, but he was more interested in warfare. He was pretty matchless in that art.

When his father died in 1790, the young Ranjit Singh was only ten years OLD. When most boys that age would be busy playing, Ranjit Singh found himself in the centre of the political scenario and became the heir to his father's legacy.

The court historian Sohan Lal Suri in Umdat ut- Tawarikh describes an event about the courage of Ranjit Singh as a young boy of 13 years.
Once Ranjit Singh got separated from his companions and reached the outskirts of Ladewali, which then was under the rule of Nawab Hashmat khan Chatha. The Nawab, who opposed the Sukerchakia MISL, was out for a hunt. Seeing the young boy alone, he attacked him. In the confrontation, Ranjit Singh not only single-handedly managed to ward off the attack but chopped the Nawab's head off. The Chatthas never opposed him ever again.

In 1795 at the age of 15, Maharaja Ranjit Singh married Mehtab Kaur, the daughter of Rani Sada Kaur, the widow of the chief of the Kanhiyas misl, Sardar Gurbaksh Singh. Rani Sada Kaur handled Maharaja Ranjit Singh's administrative affairs for many years.
It's important to know that during the period from about 1750 to about 1810, Afghan invaders had been attacking India. Several times. Ahmad Shah Durrani, who WAS ruling Afghanistan, had shot India nine times.
In 1796 Shah Zaman-grandson of Ahmad Shah Abdali entered Punjab – no ruler in Punjab was in a position to oppose him or his 30,000 troops and heavy artillery.
Maharaja Ranjit Singh realized the need for joint resistance and approached several Sikh chiefs who accepted his leadership. The collective army under the supervision of Maharaja Ranjit Singh forced Shah Zaman to return to Afghanistan. Maharaja Ranjit Singh's fame as a courageous leader spread.
When Shah Zaman left Lahore, three Sardars of the Bhangi Misl re-occupied it. The Prominent citizens of Lahore were aware of the weaknesses of their Bhangi rulers. They invited Maharaja Ranjit Singh to take over Lahore. Maharaja Ranjit Singh planned the attack with his mother-in-law Sada Kaur. The Two jointly moved towards Lahore with their armies. And without much resistance, the city was wrested away from the Bhangi Sardars.
Maharaja Ranjit Singh's rise to power as the leader of the Sikhs was evident by 1801, and he was invested with the title "Maharaja". The inauguration was conducted by Baba Sahib Singh Bedi, a spiritual patriarch of the Sikhs, on Baisakhi day, establishing him as the leader of the Sikhs. However, Maharaja Ranjit Singh, in his modesty, refused to wear any emblems of royalty. Even the government seal made no personal reference to him. It was of "Sarkar Khalsa Ji" (of the people). His government, too, was known as 'Sarkar-i-Khalsa'. He is reported to have preferred the simple title of"Singh Sahib" ” to any grandiose soubriquets. The coins issued by him bore the name of Shri Guru Nanak Ji. He remained faithful to the guidelines of the last Guru. He was indeed the leader of the Khalsa as opposed to becoming an autocratic ruler. In 1802, Maharaja Ranjit Singh was again requested by the citizens to save the city of Amritsar– the most sacred city of the Sikhs from the Bhangi Sardars. Once again, Maharaja Ranjit Singh took the Fort of the Bhangies and named itGobindgarh Fort -after the name of the tenth Sikh Guru –Shri Guru Gobind Singh Ji.

He also captured the Zamzama Cannon, an enormous cannon of Asia at the time. After winning the Gobindgarh Fort, Maharaja Ranjit Singh went to Harmandir Sahib for darshan as a thanksgiving. He vowed to cover the temple with gold, turning the revered Harmandir Sahib Gurudwara into the "Golden Temple." 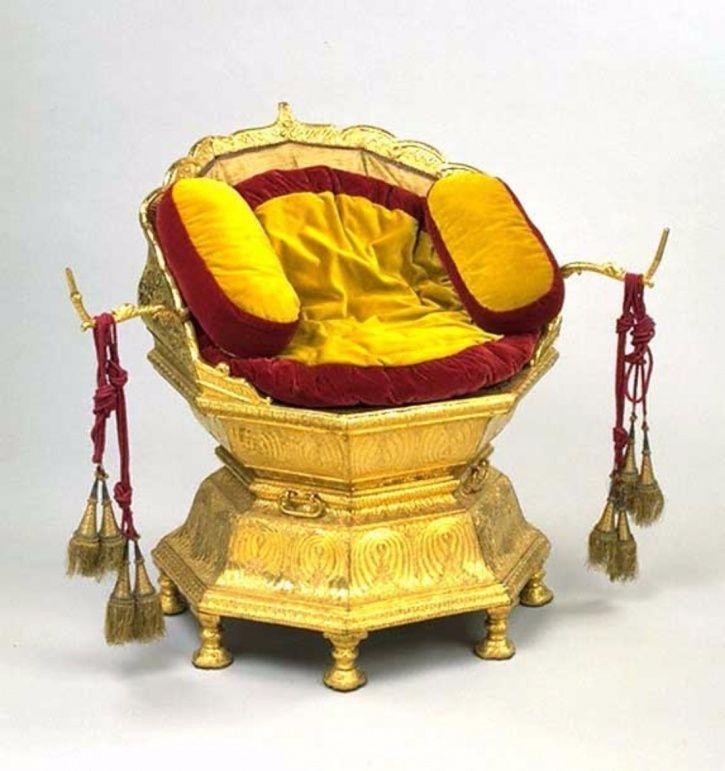 However, as history turned, infighting broke into the family of the Durranis, with brothers killing, blinding and overthrowing each other in 1812; one of the brothers was Shah Shuja. He was dethroned by another stepbrother and was trying to flee Kabul with his entourage when the British captured him and sent him to Kashmir to his brother, where he was imprisoned!

In 1819, he successfully annexed Srinagar and Kashmir by defeating the Afghan Sunni Muslim rulers. His rule thus now spread to the Jhelum valley in the north beyond the foothills of the Himalayas.
By 1820 he had consolidated his rule over the whole of Punjab between the Sutlej and Indus rivers.

Early in his career, he observed how the British troops had defeated Indian forces that were superior in numbers with their discipline and training. Their well-drilled infantry and artillery were very impressive. But Maharaja Ranjit Singh did not trust the British. Instead, he used the French and Italian generals to modernize his army- many of these Generals had served under Napoleon. Accordingly, he restructured and trained his army.
It is important to note that Maharaja Ranjit Singh was a considerable secularist. His armies were composed of Sikhs, Muslims and Hindus. Even his commanders, as well as his ministers, were from different religious communities. The Maharaja never forced Sikhism on his subjects. This was in sharp contrast with the ethnic and religious cleansing of past Muslim rulers – Afghani or Mughal. 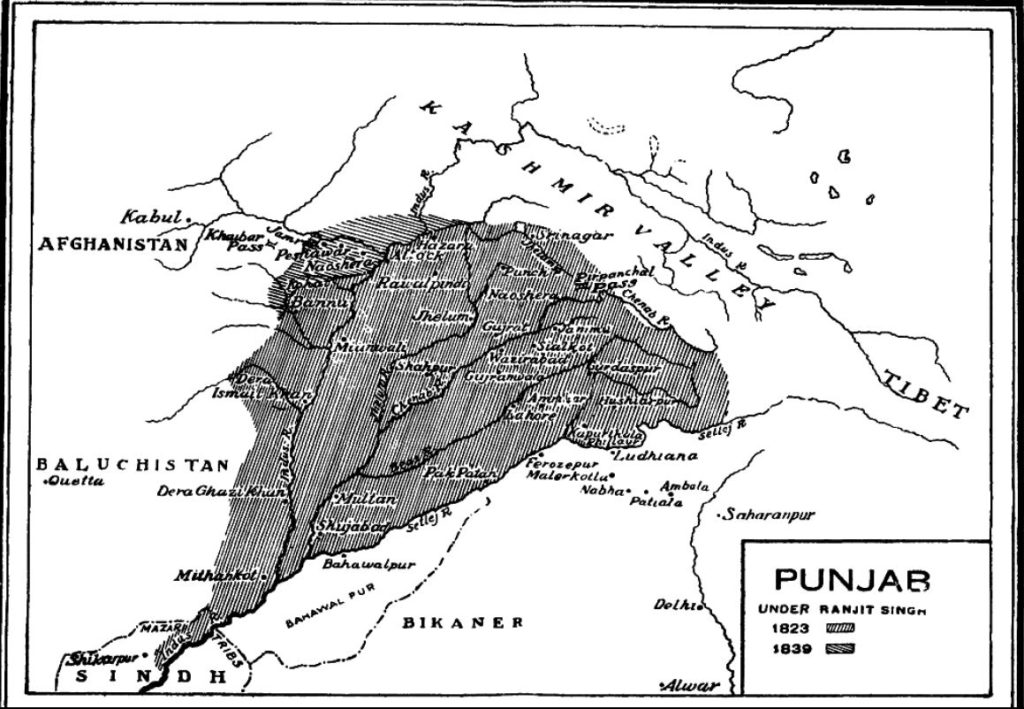 His modernized artillery and infantry army fought very well in campaigns in the North-West. Maharaja Ranjit Singh spent the following years fighting the Afghans, driving them out of western Punjab. In 1823 a treaty brought the province of Peshawar under his rule. This was the first time that non-Muslims ruled Pashtuns. From a historical perspective, this event was a landmark event. "For more than a thousand years' invaders had come down from the Khyber Pass and ruled eastern lands. Maharaja Ranjit Singh reversed this trend.”

But by 1834, Mohammed Azim Khan again attempted an attack on Peshawar with an army of 25,000 composed of Khattak and Yasufzai tribe members. The Maharaja defeated the forces.
In 1837, the Battle of Jamrud became the last confrontation between the Sikhs led by him and the Afghans led by Dost Muhammad Khan. His victory over a succession of Afghan warlords culminated in a victory march past Kabul in 1838.
Shortly afterwards, Maharaja Ranjit Singh was taken ill, and he died at Lahore in June 1839—almost exactly 40 years after he had entered the city as a conqueror. In a little more than six years after his death, the Sikh state he had created collapsed because of the internal strife prodded by the British.
However, this great Maharaja is well known and respected as the creator of Punjab.
His foreign minister best highlights the respect shown by those who worked for the Maharaja: a Muslim named Fakir Azizuddin, who, when meeting with the British Governor-General George Eden, had enquired as to which of the Maharajah's eyes was missing. Said Fakir Azzizudin. "The Maharajah is like the sun, and the sun has only one eye. The splendour and luminosity of his single eye are so much that I have never dared to look at his other eye. "